Sounds a lot like a trip to Las Vegas huh?…well, I’m not talking about American Slot Machines here: I’m talking about Japanese Pachislo “Skill-Stop” machines, also commonly called 'Pachislots' here in the US.

What the heck are they? Well, a lot like American slot machines actually, but with a few major differences.

This is an example of a Pachislo Machine featuring Harley Davidson:

Pachislo machines come from Japan and are used in Pachinko parlors (Click here for more info on Pachinko) and Pachislo parlors and are located predominantly in the Ginza (Tokyo) area of Japan. Picture a casino with nothing but slot machines lined up in neat rows…lots of neat rows.

(For an excellent Pachislo overview a quick visit to the website by Sammy/Sega is a must. If you want to see a machine in action in an actual parlor be sure to press “4” when you get to the site.)

The pachinko industry, including Pachislo, pulls in about 29-trillion yen ($315-billion) each year. That's nearly four times the revenue from legal casino gambling worldwide, as estimated by PricewaterhouseCoopers.

To get another idea on the scale of sales and popularity…consider this: Hokuto is a fairly recent best selling Pachislo Machine made by Sammy/Sega. Sammy/Sega is Japan's largest Pachislo maker and to date has sold over 620,000 of them. A game is considered a hit if sales reach 20,000. So Hokuto is a genuine blockbuster in modern Pachislo sales.

Many of the machines seem to feature a lot of English, so home use is easy in the U.S. In addition, you’ll find many American cultural icons including pop cultural references that seem to strongly influence the designs of the machines. Here are some examples—

Most recently videogames seem to be getting the full Pachislo treatment such as my two new machines- Metal Slug and Tekken (full review with photos are coming soon in Part 1I). (Click here for some photos of Pachislo Parlors)

With approximately 116,000,000 of these machines in circulation/use, these games are so popular in Japan that companies often have Sony PlayStation and cell phone versions of their games as well as merchandise featuring game machine logos/designs on cigarette lighters, action figures, instant noodles and even mini refrigerators.

Music CDs similar to the game music CDs that sometime hit the US are made of the more popular game machine soundtracks. Some of the music CDs are so popular some of the songs have made it onto Japanese radio’s top 10.

So what exactly are these machines?

Pachislo machines operate on tokens (.984', the exact same size as the BYOAC and MAME tokens by the way) rather than coins. They play across five to seven different lines, 1-3 tokens per spin.

Each machine weighs 80 to 95 pounds with dimensions approximately 34' high by 24' wide and 14' deep. The more modern machines are crammed with high-resolution LCD screens, dozens of LED lights, fantastic crystal clear & powerful multi-speaker stereo systems and in some cases additional reels to make standard play more exciting and interesting. (For a great behind the scenes on how these machines are built, click here.) 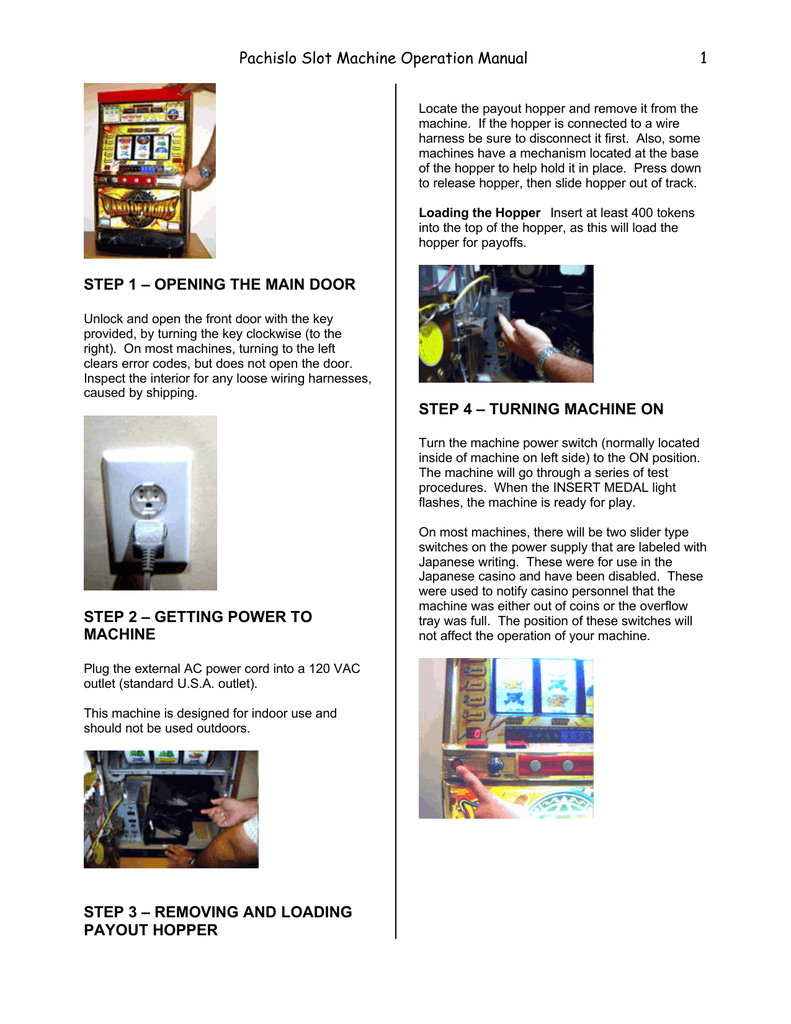 All of these machines have payout levels (odds) that are operator defined on six different levels (with six being the easiest or loosest).

Tokens are sold in packs of 50 and will last for about 5-10 minutes depending on your skill and a bit of luck. Upon a win the tokens are traded in for prizes (similar to our American arcade trade in of tickets at the redemption counters for prizes, but you get better stuff in Japan!). Some typical prizes include CDs, CD players, LCD TV’s, Golf Clubs, Stuffed Animals, and Food etc.

Pachislo machines are referred to as “skill stops” because the player utilizes a set of 3 buttons (one under each reel) to manually stop the reel. Apparently, with a lot of practice one can actually control the outcome. Basically, you have approximately .75 seconds to “pick” out a specific reel stop (ex. Cherries) and some folks are able to do this with extreme accuracy each and every time. In Vegas the reels stop at random by themselves….so the outcome is under the control of the machine, and thus it’s considered gambling. Playing Pachislo requires player skill to press the reel stop at the right time and is therefore not considered gambling, which is illegal in Japan.

But it appears that recently, the Japanese authorities are concerned that these machine are become too much like gambling machines as you can see from this quote from the 2004 Sammy/Sega Annual report —

Wish upon a jackpot rtp. Instead of a Vegas style pull handle, Pachislo machines have a spin knob (kind of like the top of a Wico Ball Top Joystick but in miniature size and facing towards you) on the front that’s used to start the reels spinning.

Another major distinction between Vegas style slots and Pachislo machines is that Pachislo machines offer “Big Bonus and Regular Bonus” Jackpots. In Vegas, a Jackpot results in an immediate payout, but on a Pachislo machine you are guaranteed a certain number of tokens (up to 500 in some cases) with a chance to increase your winnings if you stop the reels correctly when the machine is in “bonus mode”.

(Want to try a FREE Flash Pachislo machine from Sammy/Sega? Click here!
I have to admit it pales in comparison to the real thing, but it will give you an idea as to game play.)

There are 2 styles of payouts/game styles referred to as A and B machines. All Pachislo machines look similar, so the distinction here is the style/method of payout:

When you hit the jackpot on this style of machine you’ll get 24 guaranteed wins. Again, instead of a Vegas style flood of coins, these machines dole out your winnings, making it a lot more exciting. The big bonus round is set up with 2 or 3 sets of 8 guaranteed wins, between round 1 and 2 and also 2 and 3 there is a “sub-bonus” period with increased odds. This period continues until you hit a free game and then the guaranteed payouts continue.

This is essentially as above in Type A machines….but if you light up a “Big Challenge” or some other similarly named challenge on a type B you will have the opportunity to play over 200 consecutive games with increased odds to win over 600 or more tokens. These challenge rounds can last up to 15 minutes to fully play out the challenge rounds.