Munchkin is a dedicated deck card game by Steve Jackson Games, written by Steve Jackson and illustrated by John Kovalic. It is a humorous take on role-playing games, based on the concept of munchkins (immature role-players, playing only to 'win' by having the most powerful character possible).

Munchkin is the mega-hit card game about dungeon adventure. With none of that stupid roleplaying stuff. You and your friends compete to kill monsters and grab magic items. And what magic items! Don the Horny Helmet and the Boots of Butt-Kicking. Wield the Staff of Napalm. Or maybe the Chainsaw of Bloody Dismemberment. Dec 27, 2020 Munchkin is a card game designed and written by Steve Jackson and illustrated by John Koyalic. It is a dungeon adventurous role-playing game, where you backstab your enemy, grab their treasure, and move forward. Munchkin is a fictional character that is derived from the American’s children novel “The Wonderful Wizard of Oz”.

Munchkin won the 2001 Origins Award for Best Traditional Card Game,[1] and is itself a spin-off of The Munchkin's Guide to Powergaming, a gaming humor book which also won an Origins Award in 2000.[2]

After the success of the original Munchkin game several expansion packs and sequels were published.[3] Now available in 15 different languages, Munchkin accounted for more than 70% of the 2007 sales for Steve Jackson Games.[4]

A game of Munchkin being played, with coins being used to denote levels.

In Munchkin, all players start at level 1, with the goal of reaching level 10 (or level 20 in Epic Level games). Players primarily progress by killing monsters, and level up every time they kill a monster. However, players can freely use cards against monsters and other players during play, allowing them to either assist or to sabotage others during their turn. Each person's turn begins when they 'kick down the door' by drawing a Door Card face-up. A Door Card can be one of the following types: a Monster Card, which the player must engage by fighting or fleeing; a Curse Card, which applies an effect; or an Item Card, Race Card, or Class Card, which the player adds to their hand. If the card drawn is not a Monster Card, the player can either 'loot the room' by drawing a face-down door card and adding it to their hand, or 'look for trouble' by playing a Monster Card from their hand to fight it.

When fighting a monster, the total level of the player (and any supporting players) is weighed against the total level of the monster(s) to determine the victor. A successful player draws the listed amount of treasure cards and levels up either 1 or 2 levels, but an unsuccessful character must roll the dice to try and flee; players who fail to roll a five or six suffer the monster's negative effects ('Bad Stuff') or die. Should a player die, their turn immediately ends and they discard their hand, retaining their player level but drawing a new hand for equipment.

Due to the highly competitive nature of the game and the presence of rule-breaking cards, players are encouraged to use unfair tactics against others, to act mercenary to further themselves at the expense of others, or to use cheat cards to affect outcomes (such as fixing the roll of the die). Throughout a player's turn, others are free to intervene: they can passively buff or debuff the player or monsters to alter the outcome; play monster cards of matching types to make the battle more difficult; or offer to assist the player, typically in exchange for treasure cards.

Other cards that can enter play include Items, which can be used in combat, Treasure Cards, which act as sellable loot and equipment, and Curse Cards, which apply effects. Additionally, players can equip certain cards (such as armor and weapons) to raise their total level and kill stronger monsters, and can use Class Cards and Race Cards to grant extra abilities or advantages at the cost of a balanced weakness; for example, the elf race can level when helping others kill monsters, but will take additional damage from disgusting enemies.

Standard games typically last around an hour, with the game ending once a player reaches the target level and wins the match. Aside from defeating monsters, players can progress through indirect means such as selling cards (with every 1000 Gold on the sum total granting a level) or by playing special leveling cards. Most games disallow victory through indirect methods, meaning only fighting a monster can win the game. There are a few exceptions, however, such as when a player uses cards that specifically state they override rules. 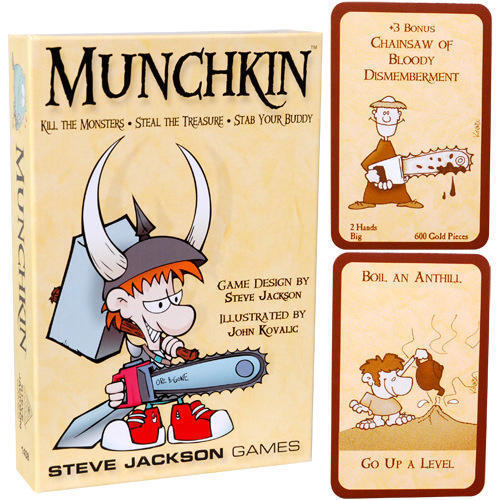 These are themed 'box set' editions of MUNCHKIN that have been released. (The overall theme parodied by each set is after the title.) Each is a stand-alone version that can be played separately or combined with any other version for a more expansive game. Most of these editions were illustrated by John Kovalic, although some were done by other artists (who are noted if applicable). Some of these have been released in Deluxe versions (which include a gameboard and movers to keep track of levels) and/or Guest Artist Editions (drawn with new art by artists other than those who originally drew them). Certain versions have been co-produced with USAopoly and/or IDW Games, and feature 'character cards' that grant starting powers and keep track of levels. These games are denoted by a '(U)' or an '(I)' after the description, respectively.

These are 'add-on' sets not meant to be played separately, but in conjunction with the base sets of cards. These include fully boxed expansions (usually of 50+ cards) and 'booster packs' (less than 50 cards). Some are set-specific, where others can be added to any set or may help combine game sets for an expanded gaming experience.

These are meant to be used with any Base Set, and may or may not have unique card backs.

These have original Munchkin backs, but can be used with any Base Set.

These expansions contain cards for several different Base Sets.

In addition, many Promo Cards and Bookmarks have been released for the various sets. These are individual cards or bookmarks (most with in-game bonuses or effects) usually included with orders from the online store (Warehouse 23), available with special offers or given away at events by company & fan representatives (aka 'Men In Black').[5]

These are items that are Munchkin-themed, but not necessarily used in the main gameplay. Items so themed may include exclusive cards for certain games, and may also have in-game effects when kept near the play area. These include:

A full listing of such accessories can be found on the MUNCHKIN.GAME[6] web page.

These are games related to the Munchkin universe, but they do not follow the exact rules and goals of the traditional Munchkin card game. Some are card games and others are combined board/card games.

Published by other game companies[edit]

An early review on RPGnet regards Munchkin as not a very serious game;[8] the rules make this clear with phrases like 'Decide who goes first by rolling the dice and arguing about the results and the meaning of this sentence and whether the fact that a word seems to be missing any effect,' and 'Any disputes in the rules should be settled by loud arguments with the owner of the game having the last word.' There are many cards which interact with or are affected by a single other card, despite the rarity of the two cards entering play together (such as the interaction between Fowl Fiend and Chicken on Your Head or Sword of Slaying Everything Except Squid and Squidzilla).

On BoardGameGeek the average user rating is 6/10.[9]Tom Vasel of The Dice Tower was critical of the game Munchkin feeling it was overpriced, had limited re-playability, and a poor and occasionally tedious gaming experience.[citation needed]

'Kill the monsters - Steal the treasure - Stab your buddy.'