Online multiplayer games with friends. An Arkham Horror April Fool's Day Joke has gotten new life thanks to fan demand. Earlier this year, Fantasy Flight Games jokingly announced The Dogwich Legacy, an expansion of the (very fake) Barkham Horror: The Card Game. Instead of players facing off against the threats of the Great Old Ones, players discovered the hidden conflict between cats and dogs. However, fans loved the idea of Barkham Horror so much, Fantasy Flight Games decided to make a new standalone Arkham Horror: The Card Game expansion set in the world of Barkham Horror.

Barkham Horror: The Meddling of Meowlathotep is a new 78-card standalone scenario pack in which investigators must stop Meowlathotep, the Prowling Chaos, Meowsenger of the Outer Feline Gods. During the scenario, players play as one of five very good dogs (such as Skids O'Drool or Duke, an actual existing dog character from the main Arkham Horror line), each of which have their own signature asset and a weakness. Both the scenario and the dog investigators aren't meant to be used in normal Arkham Horror: The Card Game campaigns, but players can build their decks using almost any card from main Arkham Horror game, save for cats of course.

Barkham Horror is written by Scott D. And drawn by Golden F. It follows the misadventures of Adrienne Barbara Whippet, a dog who moves to the titular town to meet her long lost father, Towser Brindle. Unfortunately, Towser is away on a mysterious venture overseas, and has left his house, as well as a considerable sum of money, to his daughter.

While players can't pick up Barkham Horror: The Meddling of Meowlathotep on its own, this standalone scenario does provide a fantastic excuse to jump into Arkham Horror: The Card Game. This living card game requires at least one Base Set to play and features new scenarios every month, many of which continue a storyline started in one of the game's deluxe expansions.

Barkham Horror: The Meddling of Meowlathotep will be released in 2020 and has a retail price of $19.95.

Arkham Horror: The Card Game is a living card game produced by Fantasy Flight Games. It is a cooperative game set in the universe of Chaosium's Call of Cthulhuroleplaying game which is itself based on the Cthulhu Mythos of H.P. Lovecraft and other cosmic horror writers. The title refers to Lovecraft's fictional town of Arkham, MA which is mentioned in many Mythos stories.

News of the game was originally leaked in May 2016,[2] before being officially announced in August of that same year.[3] It made its first limited public release at Arkham Nights 2016 to a sold-out crowd.

Barkham Horror The Meddling Of Meowlathotep

As a game in Fantasy Flight Games Living Card Game line, there is a regular release of non-random Deluxe expansions that start a story or campaign, followed by multiple smaller expansions (known as Mythos packs) that continue and conclude it.

Campaign play is the default mode of the game,[4] allowing a player to progress through a series of scenarios. In campaign play, choices made in scenarios have lasting effects, altering the story and how later scenarios play out. Each scenario has multiple paths of divergence offering multiple playthroughs with differing experiences each time.

During the game, the investigators work together to progress their investigation towards a positive outcome by fulfilling the requirements set out by the Act deck. However, there are forces working against the investigators, represented by the Agenda deck and encounter deck. Each turn, a doom counter is added to the Agenda deck, acting as a timer for the investigators to complete their objectives. When the total number of doom in play reaches the doom threshold of the agenda card, the agenda will advance, often to negative consequences.

During the Investigation phase, the investigators each take up to three actions. Among other options, actions include playing cards from hand or activating those already in play, moving to or investigating locations and fighting or evading enemies. Depending on the card, cards played from hand during the investigation phase may enter an investigator's play area as an ongoing bonus (an 'asset') or simply provide a powerful one-time effect and be discarded upon use (an 'event'). Many cards have a resource cost which must be paid to play the card. While cards generally require an action to play, some are 'fast' and do not require an action to be played. 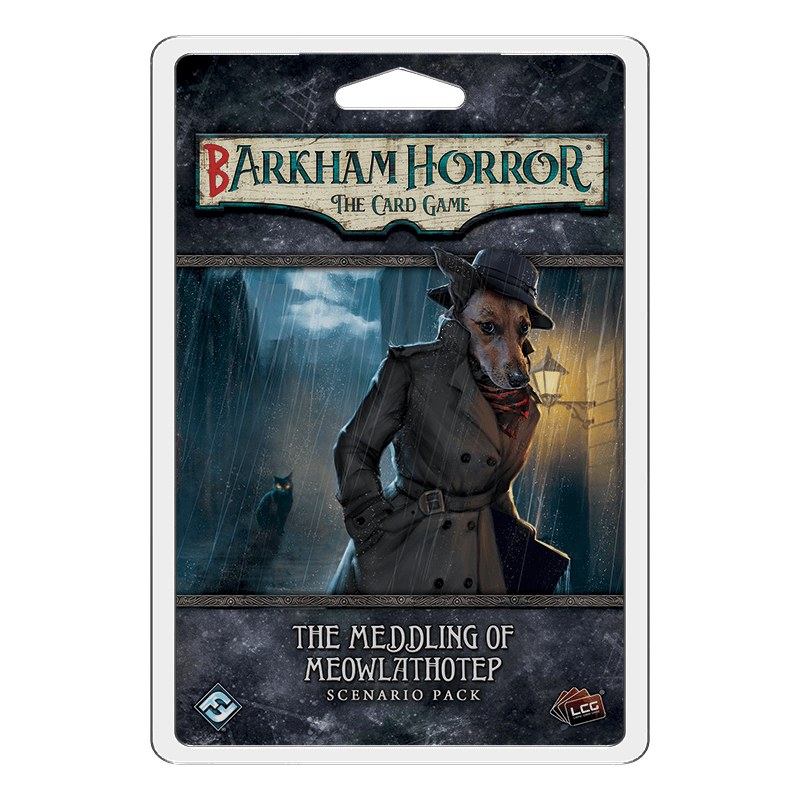 The Investigation phase is followed by the Enemy, Status and the Mythos Phase, representing the forces working against the investigators each round. Investigators may have to deal with effects or enemies that attack their sanity, health or simply their progression towards their main goal (the Act deck).

Investigators will be eliminated from a scenario if they receive horror or damage equal to their sanity or health respectively. Investigators eliminated in this way will receive permanent mental or physical trauma. This means investigators repeatedly defeated in scenarios can become progressively weaker as the campaign progresses. Investigators will, however, receive experience from scenarios (even after defeat), which can be spent to improve each investigator's deck. At certain points in a campaign, failure may lead to investigators being killed or driven insane.

Expansions are grouped into cycles that contain a complete campaign for players to go through. Each cycle is divided up into one deluxe expansion followed by six mythos packs. Deluxe expansions contain new investigators, about 60 new player cards, and the first two scenarios of a campaign. Mythos packs contain about 24 new player cards and a single scenario of a campaign. They are listed below in order of release date which is also the order in which to play a cycle's campaign.

Stand-alone scenarios are scenarios that exist outside of a campaign/cycle and are self-contained. As such, a player doesn't need any other expansions to play them or encounter cards from the core box—only the investigators. Stand-alone scenarios are printed in house at Fantasy Flight Games and are referred to as Print on Demand (POD). This means the card quality is generally lower than the packs shipped from overseas but Fantasy Flight Games can push these packs faster out to players at conventions or for general release.

Upgrade expansions are akin to the 'Nightmare Packs' from the Lord of the Rings LCG. However instead of just increasing the difficulty, these expansions provide an alternate way to play through the campaign with alternate story effects. They also provide player cards with the first one providing 20 player cards. They are also not the Print on Demand quality that is found in the stand-alone scenarios.

The Path to Carcosa cycle[edit]