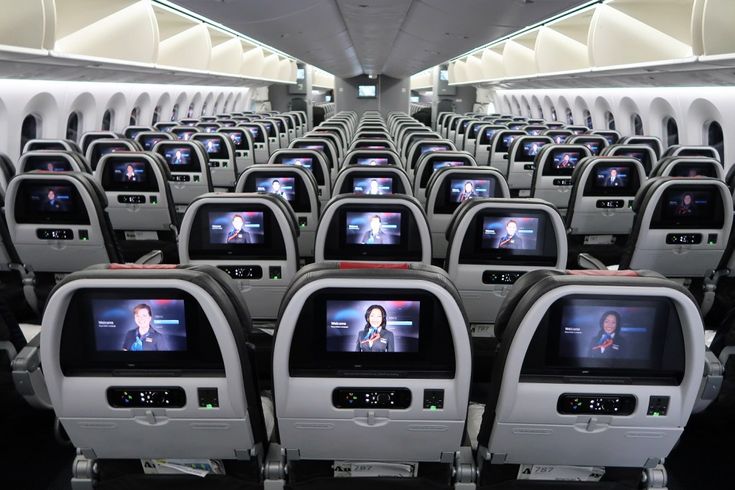 As usual, we chose middle seats so we could lower the divider and chat during meal service.

The seats are swivel seats – you have the option of three different positions when sitting. They can also be made fully flat for sleeping.

Compared to United Global First, there isn’t as much storage space to tuck away personal items.

Matilda slept (easy sleeper) while Patti entertained herself with an Orange Is the New Black marathon.

The overhead bins had plenty of room to put a large carry on bag above our seats.

Pajamas, blankets, an amenity kit, Bose noise cancelling headphones and slippers were available for use.

Although American had announced new amenity kits, they were not yet on the flight. A flight attendant was nice enough to check in Business when we asked about them.

All the flight attendants were super friendly with us- more so than we remember from previous American Airlines first class flights. It was nice trading travel tales with them and finding out a little about their families.

We had no complaints about the food. Below are some photos of the menu and what we ordered.

We were also given a bottle of water and two pieces of chocolate after our dinner.

Like the previous American Airlines international first class flights we have taken, this was a fairly comfortable flight with a flat bed. Sure, it’s not the nicest first class out there but we thought it was good enough for the amount of miles used.

This plane had been equipped with Premium Economy Seating. Though I do not like the idea of Premium Economy I found the seat very comfortable. Slightly wider (1') seat cushion however being only 2 abreast by window gave much more shoulder room. Also due to different aisle widths I was not continually kicked and bumped by flight attendants as I was on the return flight with the old layout. Row 16 being an exit row has always had excellent leg room and the new seat really makes the most of it. The leg rest and foot rest may be of value to short people and children but I found it no use at all. The in flight entertainment screen was HD and clear with a large choice of Movies, TV shows, Games, Flight Map choices and a limited choice of Live TV. International feed of CNN and CNBC as well as BBC News. There is a sports channel which claims to show football games but in February post Super Bowl it was full of soccer which was of no interest to me. so very comfortable for day flight. My only complaint is the video monitor when folded down does get in the way of your legs but I guess that will only be for take off, taxi and landing so on a long flight not really an issue. You may need to look at the seat instructions or ask the flight attendant as operating video monitor release and locating the headphone socket, USB and power points is slightly different from other equipment. The powerpoint is standard US 3 Pin Grounded Socket 110v60hz. The headrest unusually for Coach seats actually moved to a comfortable position for a tall pax and stayed there. As I said I do not like the idea of Premium Economy and either fly coach to save expense or First/Business if I need to sleep; that said AA have knocked it out of the park in comparison to the BA, VS Premium Economy seating. Obviously as it was sold as Main Cabin Extra (No Cost to Elites) there were no food upgrades, no amenity kits and no Bose headphones. As I take my own food on board just in case (non meat eater) Have many AA and other airline Amenity kits from prior flights and my own Bose QC35 ii Headphones, I felt I almost got the full experience. AA FIrst CLass is the roomiest across TATL, the Business product is also the leader with the only seat/bed that is long enough for me to lie down (6'5') has good food offerings and this Premium Economy product is equally at the top of the TATL league. As NZ and UA remove extra space coach seating and First Class, it is good to see AA upping their game.